Today, we interrupt the usual programming for the exciting reveal of the cover and plot synopsis of Watermark by the wonderful Krissi Dallas!

Watermark, the fourth installment of the YA fantasy Phantom Island series by Krissi Dallas is finally releasing this fall! If you haven’t jumped on board this island adventure full of magic, mystery, and romance, now is your chance. Enter to win an autographed Phantom Island trilogy pack, an autographed copy of Watermark when it releases, a tribal t-shirt, or an autographed copy of The Collector by debut author Victoria Scott! The giveaway will be open for entries until Friday, June 14. See information below. 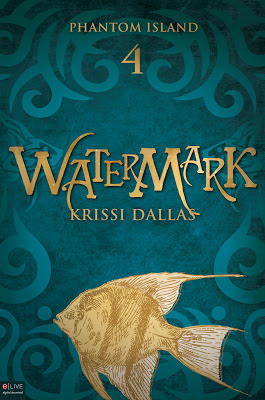 I stared at her in frustration. “What is with you?!” I exploded. She was not acting like my best friend. Like my Morgan. “You’ve been so different this summer, and I don’t get it!”
“Well, you’ve been different too! People change, you know,” she snapped back.
“If I’ve changed, fine. But at least I’m still honest with you. You, however, have turned into a liar! If we don’t have trust between us, then what do we have, Morgan?”

Relationships on the White Island are volatile and Whitnee, Morgan, and Caleb aren’t sure who they can trust—even each other. Politicians are lying, history is being rewritten, and motives are questionable. Whitnee sets out with Gabriel and a band of rebel spies to take back the enemy's biggest weapon—Whitnee's father. However, a shocking turn of events proves once again that the Island's secrets have the power to destroy more than just the truth. Separated from her friends, Whitnee battles her own fears in order to survive and protect the ones she loves. But when Morgan's illness finally comes to light, Whitnee faces a decision that could alter her future—and Morgan’s—forever. And whether she ultimately stays on the Island or leaves might not be her choice, after all.

“…[An] earnest tale of magic and romance that deals with the great distance between pain and recovery.” –Kirkus Reviews (Windchaser, Phantom Island Book 1) 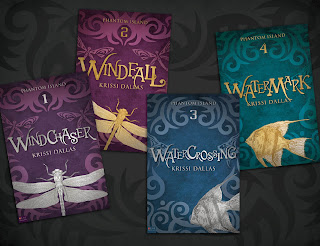 If you haven't read  the first three books, hurry to pick them up right now on Amazon, Barnes & Noble or White Island Shoppe!

And for some extra fun, take this quiz to see which tribe you belong to. 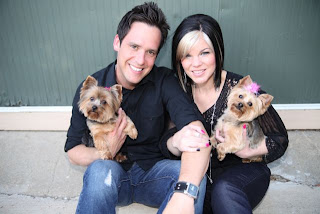 Krissi Dallas loves pop music, mismatched socks, and fried chicken. She lives in Fort Worth, Texas with her youth minister husband, Sam, and their two wicked Yorkies, Elphie and Luna. Krissi enjoys hanging out with her quirky middle school students and building the dramatic, magical, and mysterious world that makes up the Phantom Island series. Be sure to check out Windchaser, Windfall, and Watercrossing. Krissi loves connecting with teens, as well as readers and writers of all ages! You can stalk her online at www.KrissiDallas.com.

Don't forget to enter! The giveaway is open to US residents only.