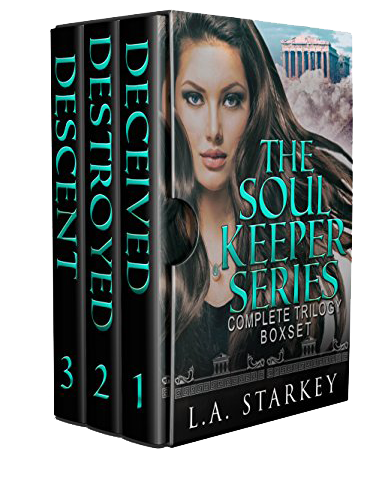 
Amazon readers had a hard time putting this series down… you will to. Now you don’t have to wait – the full story is yours for a discounted price.
This boxed set includes all three full-length novels from Starkey’s beloved Soul Keeper Series. That’s over 800 pages of intense twists and emotional turns, heart-breaking romance and soul-shattering deception – all in one series.
In a battle of wills,
of the gods of old.
For each his revenge,
will he forfeit his soul.
On the chessboard of blood,
will their narrative play.
Aged, innocent lives,
revenge claims her way.
Out of hate will come love,
and love will come hate.
For immortal and man,
have entwined their damned fate.
The battle between the Titans and the gods of old did not end with them. The demand for revenge has dripped down into the next generation.
Twins, Marcus and Nicolas, heirs to the throne of the gods and sons of the last remaining Titan, learn that the purpose of their existence is to fulfill a prophecy born of hate and despair. They must battle for Pandora’s daughter’s heart, a girl lost to the human world and unaware of her hidden heritage. For four hundred years Marcus and Nicolas have only been allowed to touch the edge of their soul mate’s dreams, but the time of the prophecy has come.
For Samantha, life has been nothing more than a series of misfortunes and heartbreaks. For years, she has kept her heart locked away, but change is rolling in like a tidal wave. She is now forced to discern the thin line between love and lie, myth and reality, and it would seem that time is running out …

Goodreads / Amazon / Barnes & Noble / iBooks / Kobo / GooglePlay
Grab for 99¢ this week only!
—
EXCERPT:
There was no moving in this moment. Her body afforded her no such luxury, as swirling white mist covered the soft green grass, giving the world an ethereal appearance. Crimson danced against the golden sky as the evening moved in quickly, hoping to make way for its dark lover.
Sam gazed around her, trying to make sense of the familiarity she felt with her setting, but she failed to hold onto the fleeting memory. The soft crunch of grass moving changed everything as realization dawned—she was no longer alone.
Her dark sapphire eyes narrowed, brow creasing as a figure cut through the dense, chalky air. He towered over her by a head or two, and judging by the large expanse of his shoulders, he often left the gym stained in his scent. As his shape continued to gain clarity, from color and size to the defined lines of a life well lived, the swell of anticipation grew within her at the story his facial features might tell.
As he drew close enough for focus, her jaw slackened and her eyes widened with wonder. He was for all intents and purposes a teenager, and yet by his exotic appearance, she guessed him to be a foreigner. Wherever he was from, he was simply beautiful.
He stopped just before her, his gaze locked on hers, and try though she may words escaped her cry for assistance. His piercing jade eyes bore into her, dark orange rays stretching lazily from the iris, his skin seeming to glitter as if kissed by the sun.
“I’ve been waiting for you.”
“For me?” Sam blinked in surprise, taking a hesitant step back.
“Ah, Samantha,” he breathed out, his brow creasing ever so slightly. “Same questions every time, my love. Shall I give you the same answers?”
“W-what a-answers?” She shook her head, attempting to draw in a breath that wasn’t filled with the smell of pure male.
There would be no relaxing in front of him for something was so very familiar and yet alarming to all of her protective senses. Brick by brick, her heart constructed a thick wall that would promise protection. He took a step forward and reached for her hand, but was a bit too late to infiltrate her senses as the wall was up and impenetrable.
She exhaled softly as their skin connected and instinctively let her fingers wrap around his as a sign of friendship. The warmth of his touch sent tingles racing along the corridors of her body and yet still the cold loneliness remained because she demanded it so. No one would ever penetrate her defenses again. Self-preservation had become her lifelong companion simply because life required such company. Author Bio:
L.A. Starkey is the author of the Soul Keeper Series, a supernatural young adult series, and The Liarus Detective Series, a supernatural middle grade series.
She is a fulltime writer, and loves spending time with her family and reading a good book. With more ideas than one person should be allowed, she is blessed to have a muse that doesn't seem to take a vacation and more energy that one might consider healthy.
She writes under the following pen name:
Kate Thomas - NA/Adult Paranormal (http://amzn.to/1SKV9ey)